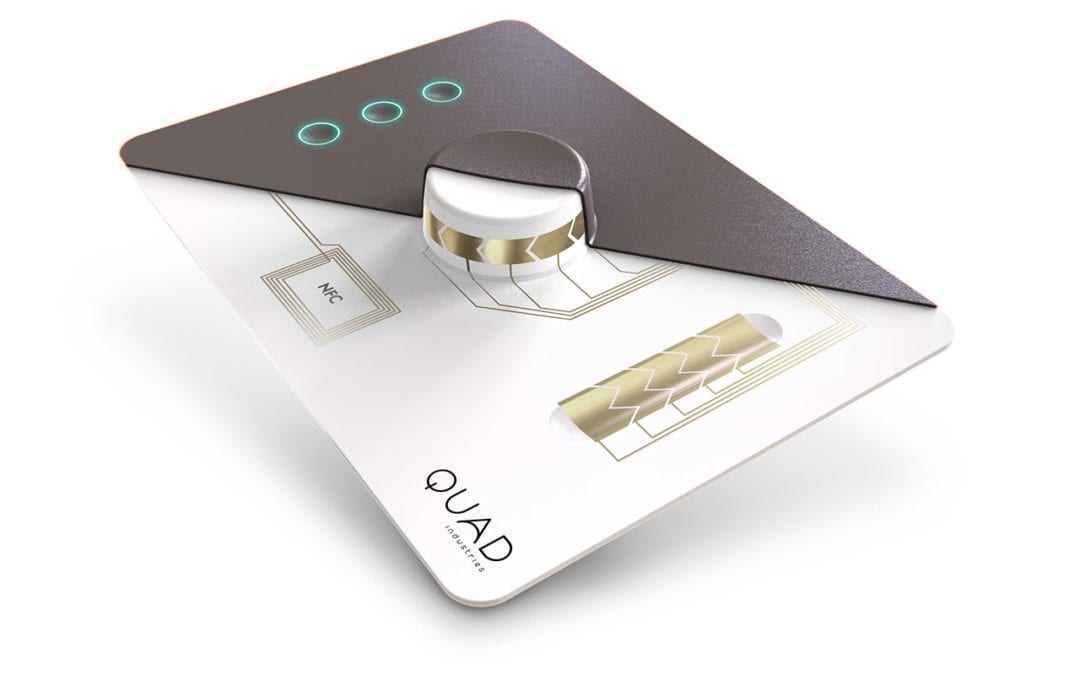 Everywhere we look, objects and materials are becoming increasingly interactive. The advent of smart surfaces will unquestionably speed up this evolution. “Embedding electronics directly into plastics and fabrics will not only make the production of smart objects easier and more cost-effective, it will also create unprecedented freedom for designers,” says Arne Casteleyn, co-owner and Business Development Manager at Quad Industries.

The demand for smart, interconnected objects is growing rapidly. “We are only at the beginning of an evolution that will have a huge impact on our day-to-day life,” explains Arne Casteleyn. “An increasing number of products and objects are being equipped with electronics, including home appliances, machines, cars and even clothing.”

Until now, such objects have been typically “retro-fitted” with touch controls, sensors and wireless communication. PCBs are most often mechanically assembled onto or inside the product. Such a classic approach typically requires multiple assembly steps involving adhesives or screws. “Today we are seeing a new trend to embed functionality in the plastic itself. The principle is simple: electronics are printed directly on a thin, plastic layer, after which they are formed into a 3D shape. In the next step, they are encapsulated during the injection molding process, creating a fully integrated smart, plastic surface,” continues Arne Casteleyn.

The advantages are manifold. Embedding the electronics directly into the plastics eliminates operations in the assembly process and reduces the risk of errors and contamination. The electronics are no longer subject to wear and tear and become less sensitive to outside conditions such as extreme temperatures or humidity. It also enables devices to become thinner and lighter. As modern consumers love thin and sleek devices, engineers are looking to eliminate every millimeter of space wherever they can.

But perhaps the most important aspect is the new freedom it presents to designers. “PCBs are in essence flat, non-bendable, two-dimensional shapes,” says Arne Casteleyn. “Attaching them to a 3D object always imposes challenges. Structural electronics enable us to integrate touch, proximity and other sensors in places, objects and shapes where this has never been possible. Some of the things that have been on the drawing boards of designers for many years can now finally be realized.”

Arne Casteleyn sees numerous possible applications in the field of Human Machine Interfaces (HMI), one of the core domains in which Quad Industries is specialized. “We are seeing an enormous demand for touch controls, no doubt influenced by the ubiquity of smartphones and tablets. But until now, these were almost exclusively flat surfaces. Smart plastics will enable us to move from flat panels to 3D shaped user interfaces.”

This trend will have a profound impact on the electronics supply chain. It presents a huge opportunity for plastic injection molders to move up the ladder since they will no longer be producing just a commodity but rather a smart product with a much higher intrinsic value.

Likewise, it is also a challenge for Quad Industries and similar companies who manufacture printed and hybrid flexible electronics. “The films we use have to withstand extreme temperature and pressure during the molding process, as well as bending and stretching for 3D shaped applications. Conductive inks and substrates need to be selected on the basis of their stretchability.”

Quad Industries at the forefront

Quad Industries intends to be at the forefront of this new evolution. “We have already achieved significant experience with the Terasel project, in which we developed a touch sensitive 3D shaped surface that functions exactly like a rotary knob. We’re also setting up joint development projects with forming and injection molding experts in various domains, including automotive, medical and consumer electronics.”

“Although there may not currently be that many market-ready applications, it is clear that smart plastics present tremendous opportunities in many industries,” concludes Arne Casteleyn. “Many people are astonished when we demonstrate what can already be done with technology that is available right now. We have an important task to communicate this potential to those who will be creating the products of the future.”

Quad Industries is a member of the Smart Plastics Network.

Contact Quad Industries for more information about our expertise, our products and our services.